The guiding principle behind it was to reintegrate former soldiers with the community as harmoniously as possible, and in the meantime, boost agricultural production, which had been affected by the war effort.

Seven and a half million acres of land was provided for eligible ex-service members to settle on, including a large settlement around Robinvale, in Victoria’s north west. 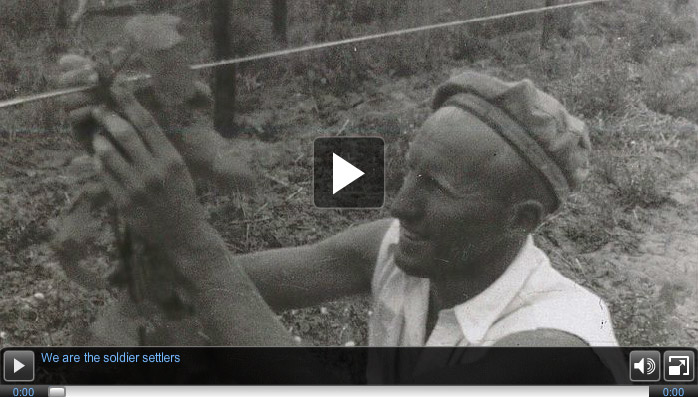 Officially founded in the early twentieth century, there was little to Robinvale besides its brick pub.

Chosen for its virgin land and irrigation potential, there was no real town until the 1950s.

Mary Merlin arrived as a settler’s wife in 1949.

“It had always been in the back of the minds of the parliamentarians – people who organise these things – that this would be a place,” she says.

“Because there was space here, and the soils were good.”

Cooking in a camp oven stove, with a three-year-old son in tow, Ms Waugh lived rough on a sandy hill for 15 months before a hut could be built.

“I arrived up there in September, and pitched our tents [in an area] which is now the seventh hole of the Robinvale golf course!

“There was nothing, only bush that I could see.

“But we were only there a few weeks before we heard tractors and trucks – we went out and they informed us that they were going to do the surveying for the Sturt Highway right through where our tents were.

“So we had to pull up the tents and find another place,” she says.

Cess Driscoll, now 93, applied for the scheme when he returned from fighting in the Pacific.

“You didn’t know much about it,” he says.

“You made an application, you were issued points for service and promotions in the Army, management capabilities and what you’d done before the war.”

Mr Driscoll says the scheme worked well on the whole.

“You were put into the State Rivers Camp, and you had to report to the compound every morning and go out on the truck to whatever job you was allocated.

“We lived in four man cubicles that they’d got from the army,” he says.

Once the properties were cleared and planted, the settlers were left alone to develop them.

Mr Driscoll says trouble came out of this situation for some of the ex-servicemen.

“It was good to get out of the Army, and anything was better than what we’d been through, but we all suffered a certain amount of war neurosis.

“At night time your gang would get together and be over at Euston on the drink.”

Lessons learnt from the past

Mary Merlin’s father was a soldier settler in Red Cliffs after World War I, and says the government did everything to avoid repeating the mistakes learnt there in Robinvale.

“The men who were choosing the people to have these blocks, they were people who’d lived through Red Cliffs,” she says.

“When they set up the settlement in Red Cliffs, each settler was given a certain amount of money to build a house.

“Well some of them drank it, some spent it on other things, so that in Robinvale, you didn’t have that choice – the house was built.

“Where it was built, the kind of house, you had no say over that.”

“People argued about it, of course; but it meant that the outcome as a whole was much fairer, because we all had an equivalent house, the blocks had fifteen acres to be planted, and it was much more equal,” she says.