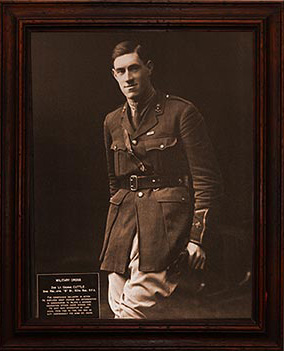 In the late 1800s William Cuttle, a Baptist minister from Whitfield Chapel, Kingswood, Bristol, England, and his family arrived in Australia settling in Geelong.

In the late 1890’s the family moved to the Swan Hill-Waitchie area to try farming, disliked the life and returned to Melbourne. In 1900 when the railway line finally reached Ultima, H.E and M.A Cuttle purchased land, moved north and opened their first business in Ultima.

The Cuttle family were General Merchant’s (storekeepers), trading initially as M.A and H.E Cuttle, later as Cuttle’s Mallee Stores with the motto; “Sell everything the farmer wants to buy’ buy everything he wants to sell”.

Their business flourished and they opened branches in Meatian and Waitchie. Both were small Mallee townships located on the railway line. They also began farming again, operating several properties with sharefarmers in the Ultima-Waitchie area.

Robin spent his school days in Ultima, completing his education at Caulfield Grammar School in Melbourne.

In 1912, as reported in the Melbourne Daily Newspaper “The Argus”, dated 11th September, H.E Cuttle and son “Robin” had taken a buggy, a pair of horses, a week’s ration of water and a compass and set out from Ultima for the Murray River. They cut their way through the Mallee trees and several days later arrived on the Bumbang Peninsula at the Murray River where they met a Mr Luelf.

An earlier government had resumed 10,000 acres of Bumbang Station for future use as an Agricultural College. This land ran from the river at Happy Valley across to the present Pumping Station and south to near Lake Powell, and was leased by Mr F. Luelf. The Cuttle family purchased the college lease property, known as “The Cliffs” and their son George (Robin) left Caulfield Grammar, and at the age of 16 and a half became manager of “The Cliffs”. The Cuttle’s operated “the Cliffs” as a grazing and cropping property and in early 1913 began pumping water from the river for agricultural irrigation. Robin remained there, managing the property.

Following the outbreak of World War I in 1914, Robin wrote home to his parents at Ultima to say the he intended to try for the newly formed Australian Flying Corps. He enlisted in Euston in 1915, but was rejected by the doctor, allegedly because of his eyesight. Robin was then advised by Major Harrison of the central flying school, Point Cook to sail for England and try for the Royal Flying Corps (RFC). His departure was delayed by severe drought and he sailed for England on 29th November 1915 on the “S.S Mulwa”.

In February 1916, Robin entered as a cadet at the St John’s Wood Officer Training School in London. He continued his training in the Royal Field Artillery (RFA) Gunnery school at Shoeburyness and Okehampton.

Robin was gazetted as a second lieutenant in the RFA in the special Reserve of Officers in July 1916.

At this stage, he had been advised to first obtain a commission in the Artillery, where he would gain valuable Gunnery experience and the transfer to the RFC.

Records of Robin’s height vary, but it is generally accepted the he exceeded 6 feet 5 ½ inches and was over 15 stone. As much his size was against him being accepted by the RFC. Nevertheless, his dream was to be a “flyer” and he continued to train in the RFA where he was nicknamed “Tiny” by fellow officers. While waiting to transfer to the RFC Robin took every opportunity to fly, visiting Hendon and other airfields.

In late July 1916, Robin aged 20, left for the Somme in France as a Sectional Battery Commander of 18 pounders in the 50th Battery, royal Field Artillery.

In November 1916, Robin was awarded the Military Cross (MC) following an engagement at Butte de Warlencourt (Somme). The citation Reads:

“For conspicuous gallantry in action. He displayed great courage and determination in endeavouring to relieve a wounded observation officer under intense fire. He sent back information by lamp signal from time to time, and was on duty continuously for some twenty hours.”

He was promoted from second lieutenant to First Lieutenant on January 7th 1917.

On the 12th May 1917, Robin was decorated at Buckingham Palace by His Majesty King George V, and was acting Captain with the RFA in the “glorious 9th” being attached to the Royal scots, when he returned to France on the 15th May 1917.

There he fought in the battle of Arras and as quoted in his war record “assisted in the working captured enemy guns”.

Finally in August 1917 Robin transferred to the RFC in England. He attended flying schools at Reading and Hythe, completing the course at Cramlington.

Robin returned to France in December 1917 as an “observer” in the 49th Squadron, “C” Flight, RFC. He was reputed to be the biggest aviator in the RFC in World War I.

Robin continued to fly as an observer on photo reconnaissance flights and bombing missions. As reported in a letter to his mother, “He was the only observer with the squadron who used two Lewis guns joined together, because as they were heavier, the others were not strong enough to move them about at high altitude. I remember the first day he had them fixed, referring to them as his “section”; two guns being a section in the RFA, his previous commission.” His pilot was a Canadian, lieutenant Leckie, and their plane was named “Tuff Guys”. Together they were very successful, bringing down a number of enemy planes.

However the life span of flying crews was seriously short in World War I, and on the 9th May 1918, both Robin and Leckie’s luck ran out. They were returning from a successful bombing raid on laden ammunition trains in the German occupied French town of Peronne, then behind enemy lines, when they were attacked. Robin’s best chum Dreschfeld, who was also on the bombing raid wrote “While over the lined the formation was attacked by a vastly superior number of Hun triplanes, five of which were brought down during the fight. Cuttle’s machine was seen to go down, apparently well under control and presumably to captivity.”

Alas this was not the case, and another artillery friend wrote “Tiny put up a grand fight bringing down two machines before he received his fatal wound”.

The fight took place near Bray in the “Arras” sector of the Western Front.

Robin’s Body was never found and early in 1923, his mother and sister travelled to France where they were led by locals and members of the 49th Squadron to a crater in a field near Caix. It was thought that the wreckage indicated there had been a bomb still aboard the DH-9 when the machine crashed.

The “Arras Flying Serviced Memorial” commemorates the 1000 airmen (including Robin), of the Royal Naval Air Service, the RFC, and the RAF who lost their lives on the Western Front and who have no known grave.

When it was confirmed that the railway line was to be extended to the Bumbang Peninsula on the Murray River, Cuttle’s Mallee stores decided to engage the services of Saxil Tuxen (Government Town Planner) and R.A. Black (Surveyor) to plan and survey a private township.

The name of Robinvale first appeared when Robin’s mother erected a hessian banner with the name Robinvale outlined in flowers. This greeted the special train from Bendigo, which had been engaged by Cuttle’s Mallee Stores to carry prospective buyers to the land auction of their new township, on the 23rd October 1924.

The memorial windows were dedicated on Saturday 3rd October 1926 by Rt Rev’d M.C. James (the first Bishop of St Arnaud), as part of his opening and dedicating of the new Holy Trinity Church of England, Ultima.

These stained glass windows were recently relocated, with the assistance of the descendants of the Cuttle family and friends to St Peter’s Anglican Church, Robinvale, where they were dedicated by the Rt Rev’d Andrew Curnow (Bishop of Bendigo) on the 8th February 2009.

In 1984 after a visit to French battlefields by Alan wood, Member for Swan Hill, in the Victorian State government, the towns of Villers Bretonneux, in northern France and Robinvale, were “twinned”. Villers Bretonneux was liberated by the 13th, 14th and 15th Australian Brigades on 25 April 1918. The victory was crucial for the rest of the world wide conflict, the allies stopped the German offensive and took a great part in the final victory six months later. The people of Villers Bretonneux have never forgotten, and never will forget, the support they received from Australia.

Following the twinning, Robin’s uniform was donated by the Cuttle family to the Villers Bretonneux Museum which is located above the village school.

Robinvale’s proud link with France extends back to World War I, when the son of Robinvale’s founding family (Herbert and Margaret Cuttle) was killed in air combat over Caix, near the village of Villers-Bretonneux.

Lieutenant George Robin Cuttle was reported missing in May 1918. After a lengthy search, his family finally found the wreckage of his plane in a field in Caix, in 1923.

Lt. Cuttle was among many Australians who fought courageously to liberate Villers-Bretonneux from the Germans during the great war.

Historians record that if not for Australian troops in the closing stages of World War 1, Villers-Bretonneux and the whole Western Front would have been laid open to the German Army.

The battle at Villers-Bretonneux ranks high in acknowledgment of Australia’s war commitments along with Gallipoli, Kokoda and many others.

With the war almost ended in early 1918, the German Army launched a massive attack on the Western Front, near Amiens, desperate to separate the French and British Armies.

A key part of the attack was against the Australian 9th Brigade at the road into Villers-Bretonneux.

The Germans were beaten back, but a single Division was all that remained between the Somme and the French Army, camped 18km south. Battle-weary British Divisions defended the town for around 20 days. Then, on April 24th, the Germans launched a second assault with infantry, mustard gas and tanks.

Villers-Bretonneux fell after fierce fighting, but the German victory was short-lived.

The 13th and 15th Australian Brigades seized the initiative by counter-attacking that night. Fighting began at 10pm and lasted until dawn. Except for a few who escaped, all the Germans in the village were killed or captured. Almost 2,400 Australian soldiers died in the battle (source).

The bond between Villers-Bretonneux and Australian was cemented after the war when the City of Melbourne was adopted the war-ravaged village and pledged £22,700 to rebuild the local school. The money was raised by Victorian school children who held penny drives.